NFC reader, that can do it…

We have a very useful keylogger for one device, who suddenly started acting like a real jerk, giving a lot of errors working in the field. In short, keylogger is responsible for managing the cash register keyboard. To find the bug in his work, we need very much to push buttons (alas, there is no way to catch errors via software, and seemingly, everything works flawlessly)

How the button on the keyboard can be pressed? For example, the electronic board of the keyboard can be soldered and the pins that are responsible for a certain key on a certain device can be shortened (the idea of a Robo-hand that will literally push the buttons is while rejected). Trouble hurts a lot with these robots and their laws of robotics)

In general, the whole problem boiled down to the fact that you need to switch a large number of pins. And how to do it? It’s very simple! Especially if you have an awesome box with a stm32 on it’s board. As, for example, our box. At the afternoon it is the NFC reader, but at night it is a universal debugging board, which can be almost anything.

Almost all, because it can’t switch 16 pins by itself (not enough free pins), but it has an I2C output, which we connected to group of circuits-switches by the deft movement of hand with soldering iron. 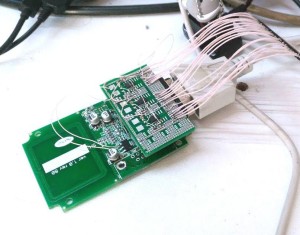 It’s only a day of work, but it turned out simple and reliable device, which helped us to catch the offending bug.